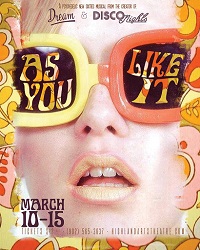 × AS YOU LIKE IT Adapted & Directed by Wesley J. Colford Music Direction by Ciaran MacGillivray Choreography by Lesley MacLean

Silvius loves Phoebe, who loves Ganymede, who loves Orlando, who loves Rosalind, who’s disguised as a man, who loves… wait, what? But when a band of merry lovers ditch the square confines of 1960’s society to join a hippie commune in the forest of Arden, the far-out shenanigans are just getting started…

A psychedelic new sixties musical from the creator of: DREAM & DISCO NIGHTS

Part of the HAT 2020 Winter/Spring Season