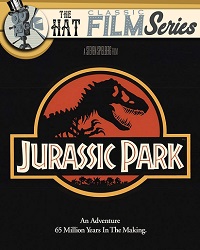 × One of pre-history's most beloved films is coming to HAT for a one-night-only screening!

See the original film that inspired a franchise - based on the novel by Michael Crichton. Re-visit a world where dinosaurs rule the earth, but only for the amusement of paying tourists. However, a breakdown of the island's security system causes the creatures to escape and bring about chaos. See it the way it was intended to be seen: on the big screen!

Tickets only $7 plus HST. Book now to reserve your favourite seats before it's too late!

Welcome to the park...