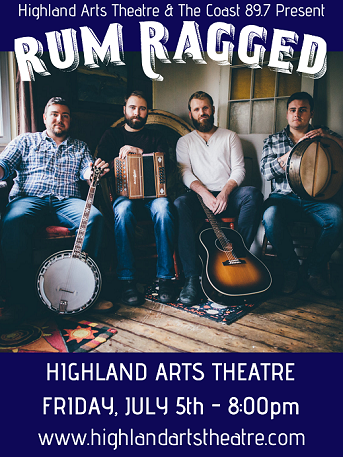 Few traditional Newfoundland bands have risen as quickly in the ranks as Rum Ragged. Formed by singer/guitarist Mark Manning and singer/accordion player Aaron Collis just two years ago, Rum Ragged has garnered respect from a loyal, ever-growing fan base as well as their musical peers.

From spirited instrumentals to heartfelt ballads, they pay homage to the greats that came before them while carving out a fresh, unique sound of their own. While their pub shows have transformed into festival headlining gigs in a very short span of time, they are a group who are comfortable performing in any venue with a serious want to spread the reach of their music.

Rum Ragged released their debut album in the summer of 2016, it received widespread attention and acclaim with a MusicNL nominations for "Album of the Year" and a Music NL win for "Folk Roots Recording of the Year" in 2016. The album was also nominated for 2017 ECMA "Roots/Traditional Album of the Year", the group was awarded MusicNL Celtic/Traditional Artist of the Year" in that same year. Their recent 2018 recording “The Hard Times”, has in short time garnered top spot on iTunes Canada charts, award nominations and the coveted #1 spot on Fred’s Record’s wall of top selling records.

Rum Ragged boasts an extensive and consistent touring and show schedule including past shows in Eastern, Central, and Western Canada, Scotland, Trinidad, Jamaica, Bahamas, Cuba, United States, and Mexico among others. When they are not on the road Rum Ragged keeps happily busy in their home province of Newfoundland and Labrador.

Since Manning and Collis expanded to a four-piece, with Anthony Chafe on bodhran and Michael Boone on bass and banjo, they are now able to deliver the full traditional spectrum in a live context. Hailing from four different outport communities around the island, Rum Ragged now represents the best that this province has to offer in the traditional/folk genre. With their acclaimed debut album, a best selling holiday album and their flying off shelves recent sophomore effort, Rum Ragged continues to be the group to keep you eyes and ears on.