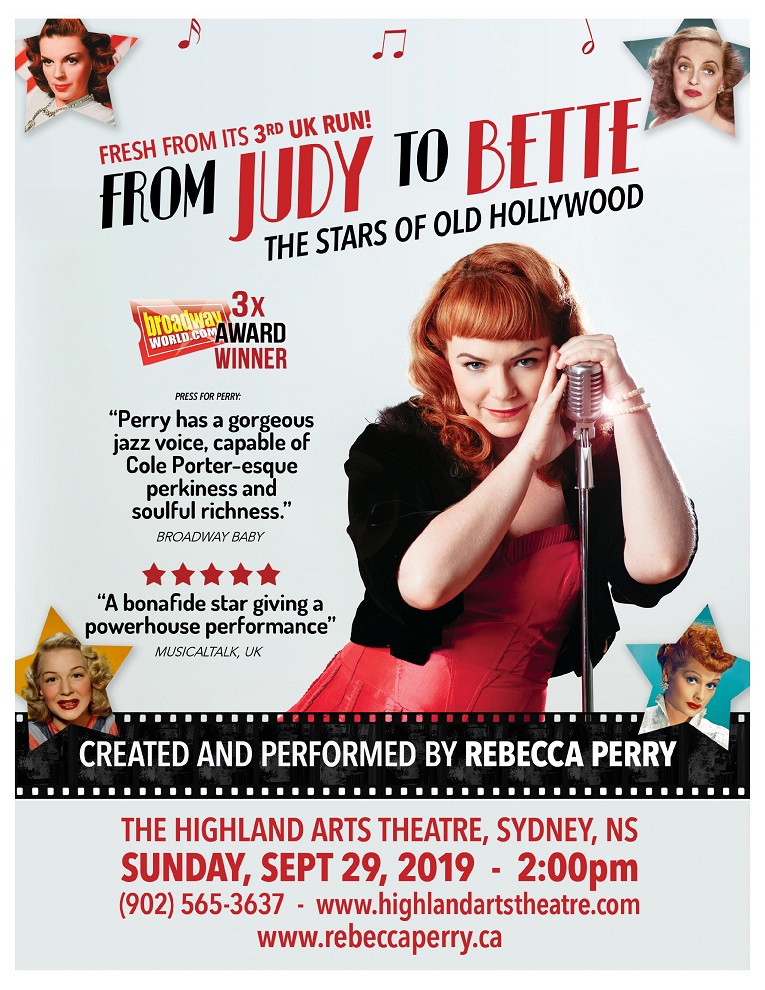 From Judy to Bette: the Stars of Old Hollywood

× Judy Garland. Lucille Ball. Bette Davis. Betty Hutton. Trailblazers refusing to be “just another ingénue” during Hollywood’s Golden Age. Weaving scandalous headlines, famous songs and comedy gold, journey through the groundbreaking careers of the screen legends of yesteryear. Having been performed in over 25 cities worldwide so far, this solo show is created and performed by triple BroadwayWorld award-winner Rebecca Perry (Stage/TV’s Confessions of a Redheaded Coffeeshop Girl).★★★★★ "An unadulterated five-star show ... A bonafide star giving a powerhouse performance." - MusicalTalk

★★★★ "An absolutely perfect homage to days gone by, repeatedly hitting just the right tone to evoke the Golden Era of Hollywood... A voice to bring the house down, articulate and heart-warming storytelling, this was a spectacular hour of glorious, pure entertainment." - The Mumble

Rebecca Perry is an actor, singer and writer based in Toronto. She has worked with a variety of companies across North America in theatre, film, television, and voiceover. Her solo shows have played around the world, including rave reviews from the Edinburgh Festival Fringe.

Perry's most recent solo show, From Judy to Bette: The Stars of Old Hollywood, which premiered at the prestigious Next Stage Theatre Festival, sold out its entire run and garnered a feature from CBC Radio, which also aired songs from the show. It began its professional touring life in 2017, performing in Northern Ontario with Tour de Fort and the Sioux-Hudson Entertainment Series. Since then, and now a full-length show, it has toured to sixteen regional theatres across six counties of England in 2018, and also played twice in the East Coast. Following the footsteps of Perry's first two shows, it played at the Rose Theatre, Brampton just before heading to the Edinburgh Festival Fringe for a critically acclaimed and highly successful run at the Gilded Balloon's newest venue, the Patter Hoose. From Judy to Bette is returning to the East Coast in fall 2019, and is booked for a two-week run at the Sudbury Theatre Centre in early 2020. More performances are under discussion for venues around the world.

Perry was awarded a 2016 Harold Award, celebrating both her creative and entrepreneurial spirit and her understanding of the business side of acting that has helped her successfully create and perform her three respective solo shows that she tours across the globe.