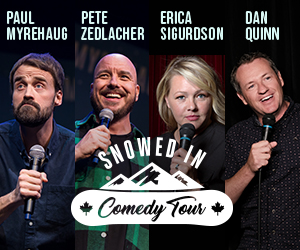 THE SNOWED IN COMEDY TOUR

The Snowed In Comedy Tour has turned into a Canadian success story, celebrating its fourteenth year. It has now grown to become the biggest comedy tour in Canada. Playing in 70 cities this year, coast to coast. In a market still dominated by American acts, with American TV credits, a small Canadian comedy tour has managed to succeed. Like the Tragically Hip they have done it by touring and making more and more people laugh, year after year. The tour has now performed in Australia, The US, France, and Switzerland. The tour has received numerous standing ovations.

Four international comedians come together to create one amazing show with each bringing a unique and hilarious take providing something for everyone.

Just for Laughs winner Dan Quinn is joined by the Great Canadian Laugh Off winner, Paul Myrehaug and 6 time Canadian Comedian of the year nominee, Pete Zedlacher. We are proud to announce that Erica Sigurdson with over 70 appearances on the Debaters, will be joining us. Don’t miss out on the comedy show called “Better than the Just for Laughs Tour” and “Delivers a Flurry of Laughs”.

COVID-19 Protocols will be in place as per NS Public Health Guidelines at the time. Please note: we are currently selling at full capacity, however we may have to redistribute seating to allow for physical distancing if deemed necessary by NS Public Health. Assuming the continuation of NS Phase 5, the performance will be open to full capacity with no physical distancing.

We developed several enhanced safety protocols reviewed by public health, occupational health and safety at the Department of Labour and Advanced Education and Department of Communities, Culture and Heritage.

By entering Highland Arts Theatre, you are acknowledging you've completed the Province of Nova Scotia's COVID-19 self-assessment and confirm that you or anyone in your household: •do not exhibit any of the symptoms of COVID-19 •are not awaiting the results of a COVID-19 test

By entering Highland Arts Theatre, you agree to adhere to any federal, provincial or municipal health and safety directions and venue protocols related to COVID-19. You recognize the contagious nature of COVID-19 and voluntarily assume any associated risk.